AKRON, Ohio, Jan. 7, 2019 – To celebrate its legacy in the sport, the National Football Foundation and College Hall of Fame will induct the Goodyear Blimp as an honorary member of the College Football Hall of Fame. The blimp will be the first non-player or coach to be inducted.

What started as a request from network television to provide aerial coverage for the 1955 Rose Bowl Game telecast has turned into a long-standing commitment to college football coverage. Since then, the blimp has covered more than 2,000 games from the Rose to the Cotton Bowl and everything in between. For players and fans, the blimp has come to signify the magnitude of games and the superior performances that take place on the field.

“College players and fans know that when the Goodyear Blimp shows up, it’s a big game. Its presence is intrinsically known and tied to the traditions that make college football so great,” said Archie Manning, National Football Foundation chairman. “As the eye in the sky to college football’s greatest coaches, players and moments, it’s only fitting that the Goodyear Blimp joins the College Football Hall of Fame in a year when the game celebrates its 150th anniversary.”

“I’ve been lucky enough to both play and broadcast underneath the shadow of one of sports’ biggest icons, and each time it’s special,” said Kirk Herbstreit, former college football player and ESPN analyst. “For me, playing under the blimp felt like a payoff for the hard work that goes into game day, so I’m excited it’s getting recognized for its contributions to college football.”

In its sports history, the Goodyear Blimp achieved major broadcast “firsts,” including the first to provide aerial coverage of a major sports event and the first to deliver high definition live video to a national sports game. That innovation intended to enhance the players and fans’ experience continues to this day with a BlimpCast on Jan. 7 when ESPN will conduct a live production of the 2019 College Football Playoff National Championship from inside the Goodyear Blimp airing on ESPN3 and the ESPN App as part of ESPN’s MegaCast presentation.

“Goodyear is proud that our iconic airship is an honorary member of the College Football Hall of Fame and will live in the company of college football legends,” said Todd Macsuga, Goodyear’s general manager brand marketing, North America consumer. “The Goodyear Blimp has established itself as a symbol of the greatness that takes place on college football fields each Saturday.”

Fans will be able to experience the blimp’s history in college football with a new exhibit set to open later this year at the Chick-fil-A College Football Hall of Fame in Atlanta. The exhibit will showcase historical blimp artifacts, video footage, pictures and more.

Goodyear is one of the world’s largest tire companies. It employs about 64,000 people and manufactures its products in 47 facilities in 21 countries around the world. Its two Innovation Centers in Akron, Ohio, and Colmar-Berg, Luxembourg, strive to develop state-of-the-art products and services that set the technology and performance standard for the industry. For more information about Goodyear and its products, go to www.goodyear.com.

About The National Football Foundation & College Hall of Fame
Founded in 1947 with early leadership from General Douglas MacArthur, legendary Army coach Earl "Red" Blaik and immortal journalist Grantland Rice, The National Football Foundation & College Hall of Fame is a non-profit educational organization that runs programs designed to use the power of amateur football in developing scholarship, citizenship and athletic achievement in young people. With 120 chapters and 12,000 members nationwide, NFF programs include Football Matters®, the Chick-fil-A College Football Hall of Fame in Atlanta, The William V. Campbell Trophy®, annual scholarships of more than $1.3 million and a series of initiatives to honor the legends of the past and inspire the leaders of the future. NFF corporate partners include Delta Air Lines, Fidelity Investments – a proud partner of the Campbell Trophy®, Herff Jones, New York Athletic Club, the Pasadena Tournament of Roses, the Sports Business Journal, SportsManias, Under Armour and VICIS. Learn more at www.footballfoundation.org. 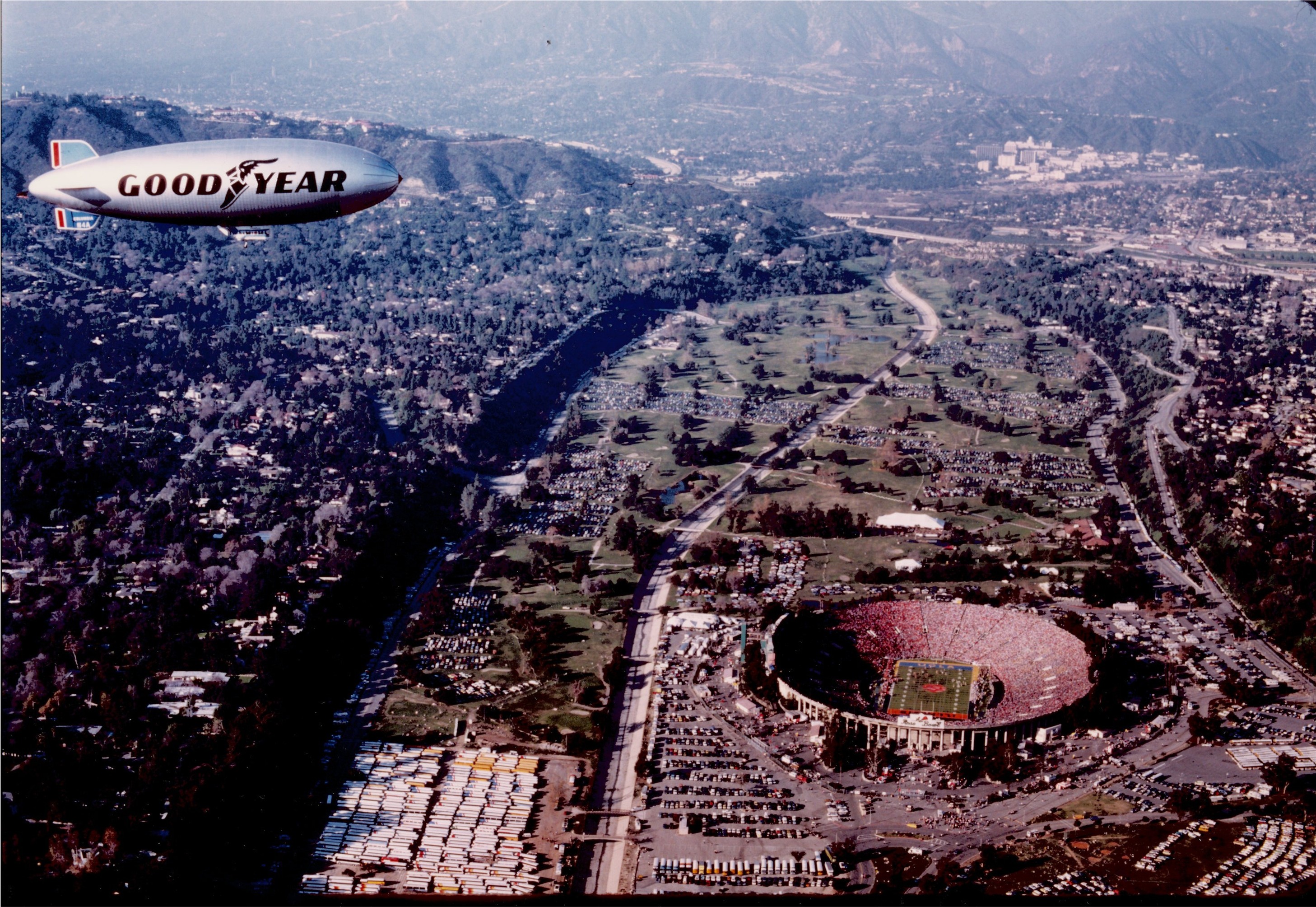 To celebrate its 64-year legacy in the sport, the National Football Foundation and College Hall of Fame will induct the Goodyear Blimp as an honorary member of the College Football Hall of Fame. The blimp has provided aerial coverage for college football’s biggest contests dating back to the 1955 Rose Bowl. Here, it flies over the 1976 Rose Bowl in Pasadena, California. 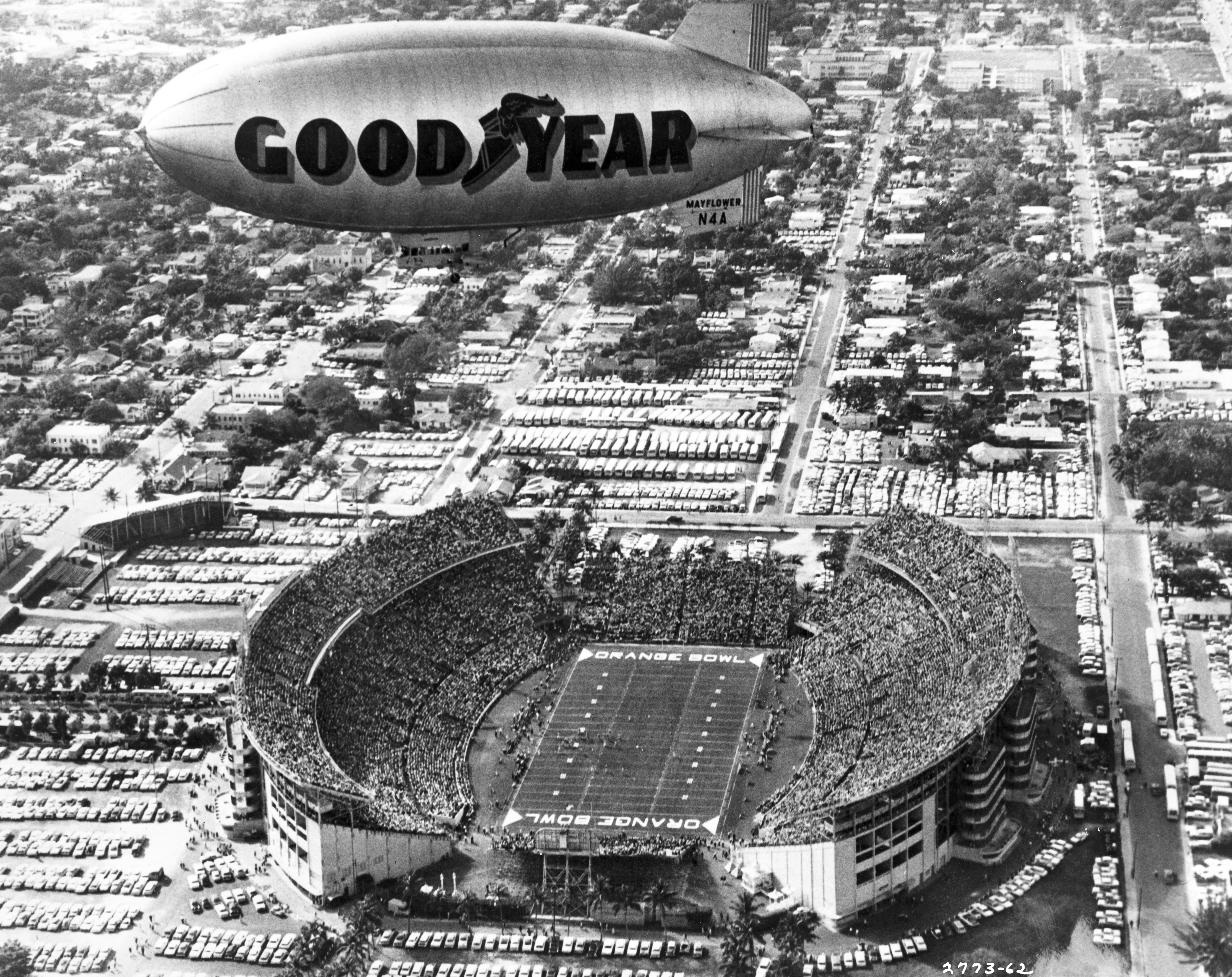 The Goodyear Blimp will be the first non-player or coach to join the College Football Hall of Fame as an honorary member. The blimp has revolutionized the way fans experience the game, covering more than 2,000 games in its 64 years. Here, it flies over the 1962 Orange Bowl in Miami, Florida. 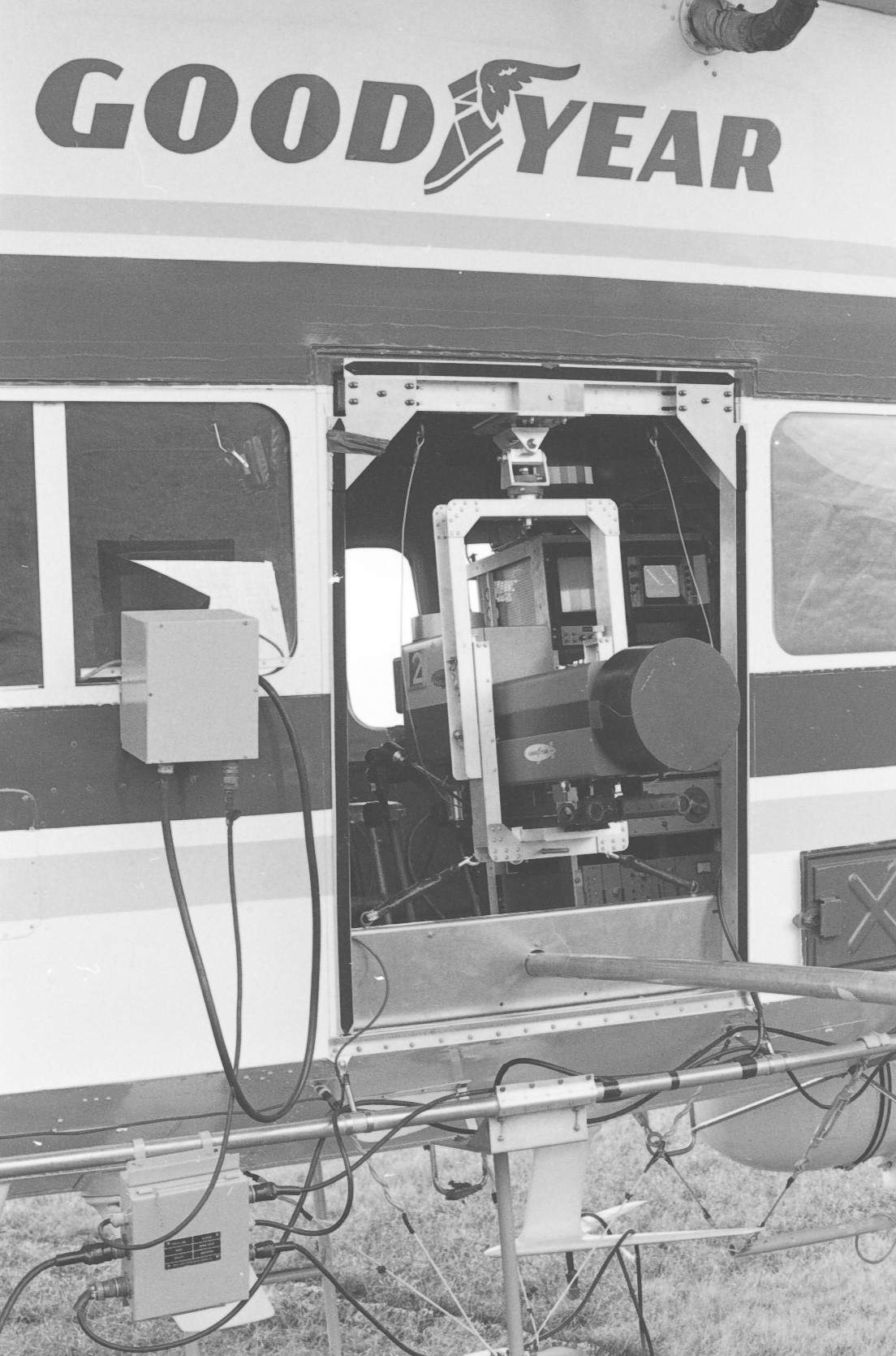 The Goodyear Blimp is being recognized by the National Football Foundation and College Hall of Fame for the way it has revolutionized college football viewing. In its sports history, the blimp achieved major broadcast firsts, including the first to provide aerial coverage of a major sports event and the first to deliver high definition live video to a national sports game. Here, the blimp flies over Houston, Texas, in 1975. 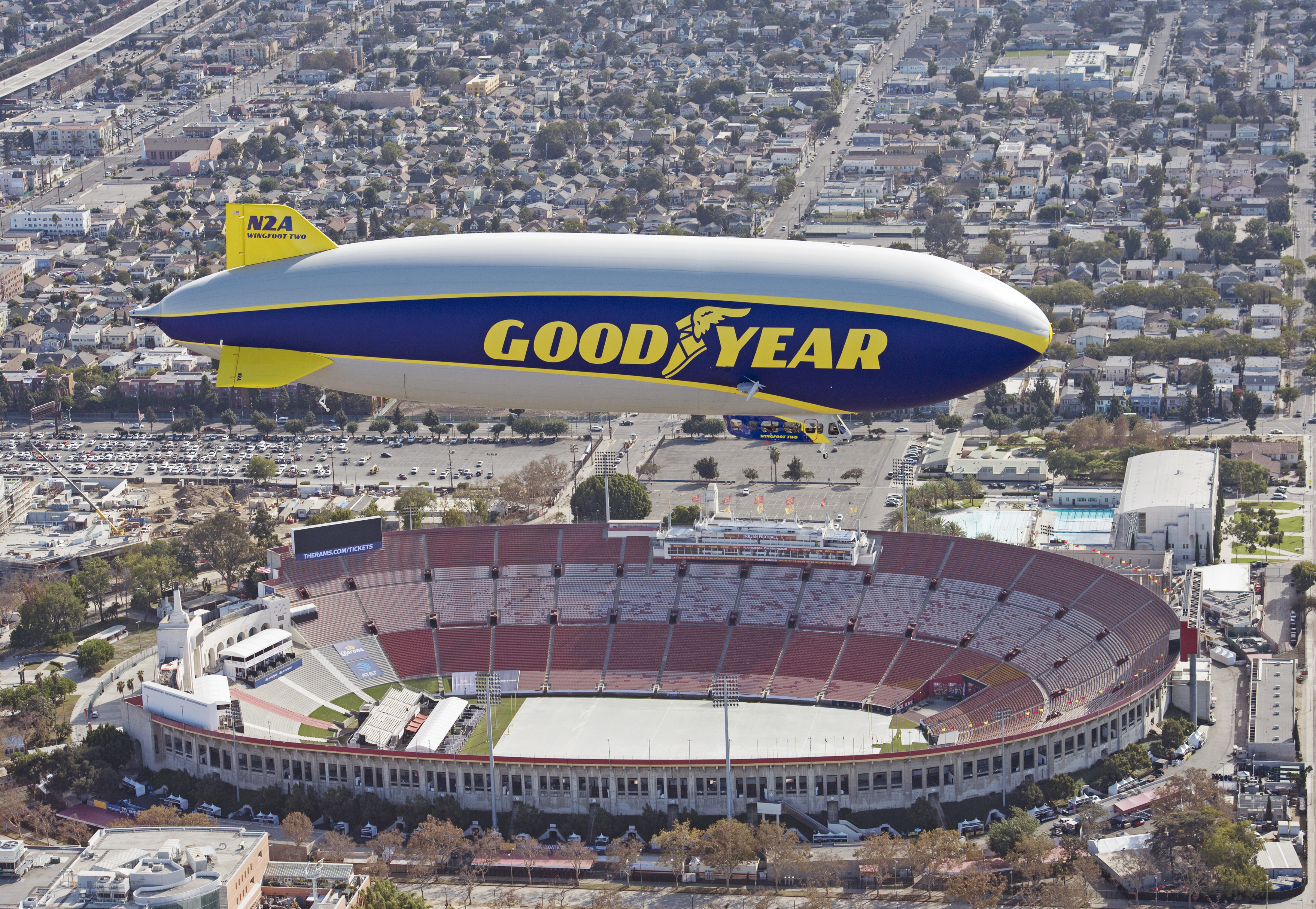 The iconic Goodyear Blimp is being inducted as an honorary member of the College Football Hall of Fame. For players and fans, the blimp has come to signify the magnitude of games and the superior performances that take place on the field. Here, the blimp flies over the Los Angeles Coliseum in 2017.