AKRON, Ohio, Sept. 28, 2022 – This college football season, The Goodyear Tire & Rubber Company is celebrating the fans and players that venture from their home stadiums to take on the challenges of road games each week. To gain an inside look at the drive it takes to win on the road, Goodyear and The Player’s Tribune surveyed 68 former Football Bowl Subdivision (FBS) players to uncover college football’s toughest road environments and fan traditions.

"Winning college football games is always hard, but it takes a special kind of preparation and confidence to overcome obstacles and outperform the opposition on the road,” said Robert Griffin III, ESPN NFL and college football analyst and one of the former players surveyed. “Through partnering with Goodyear on this initiative, I’m excited to give fans an inside look at the road-game challenges their favorite teams and players experience each week.”

In addition to the survey, Goodyear is bringing the debate on college football’s toughest road environments to fans this season via The Goodyear Road Tested Sweepstakes. From now through Nov. 30, fans can share their opinions on the toughest road environment for a chance to win tickets to the College Football Playoff National Championship and a tailgate experience in the most road-ready vehicle out there: the Goodyear EarthRoamer®.

“As a long-time college football sponsor, Goodyear has witnessed many of college football’s biggest matchups and most historic rivalries over the years, and we know that road games are where grit is most tested,” said Meg Lee, vice president of Marketing at Goodyear. “In spotlighting college football’s toughest road environments, we’ll help get fans and players alike ready for the challenges they may face on the road this season.”

Toughest Road Game Environments: Respondents shared that the following college towns were the toughest road-game environments for visiting teams. When asked what factors contributed to their pick, 91% of respondents said fanbase and 53% said climate.

Toughest Road Game Traditions to Face: Of the many road team traditions and superstitions in college football, the following were named by former players as the most intimidating for visiting players:

Most Challenging College Town to Travel to: Former players named the following as the toughest towns to travel to, with “distance to opposing city” named as the top reason why:

Best Traveling College Football Fanbase: These college towns were identified as having the best traveling fanbases for away games:

Fans can tune in to Goodyear’s Road Tested video launching on Oct. 14 that relives one of college football’s toughest road tests. In partnership with The Player’s Tribune, the video spotlights Robert Griffin III and his iconic road win in 2010. Fans can view an initial teaser here.

The Goodyear Tire & Rubber Company and The Player’s Tribune conducted an online survey among n = 68 former FBS college football players in the U.S. who played between the years 2001-2021. The survey was conducted on August 19-29, 2022 and has a margin of error of +/- 12 percentage at a 95 percent confidence level. 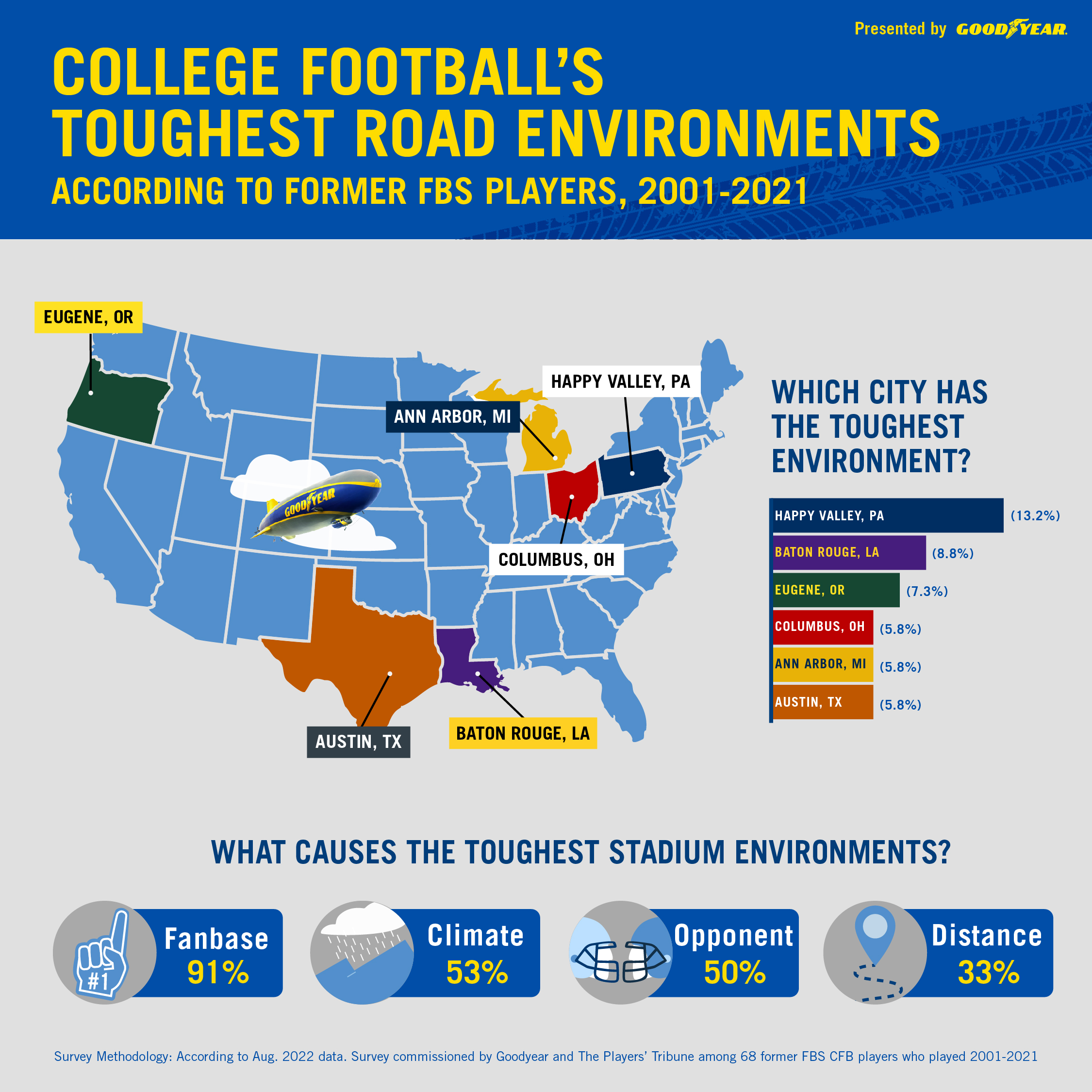