Hosted on May 8 at Darlington Raceway – one of the Cup Series’ oldest active tracks – the Goodyear 400 celebrates the history of stock car racing and signifies another milestone chapter in Goodyear’s 68-year affiliation with NASCAR.

“Our entitlement sponsorship of the Goodyear 400 represents a continuation of our six-decade commitment to NASCAR through tire innovation and allows us to celebrate the sport’s storied history and talented drivers of today,” said Karen Maroli, Goodyear's vice president of marketing. “NASCAR’s Official Throwback Weekend is always a highly-anticipated stop on the circuit, and alongside Darlington Raceway, we look forward to providing race fans with an unforgettable experience.”

Amid a race weekend known for drivers’ nostalgic paint schemes honoring former drivers and memorable stock cars, Goodyear will sport a vintage sidewall design on its Eagle race tires, last used during the 1980-1992 Cup Series race seasons. The throwback tires mimic the spray-painted logo designs of the past, paying tribute to the first time Goodyear featured “Eagle” on its race tires’ sidewalls in NASCAR. The tire design will be used at all three national series races during the Official Throwback Weekend of NASCAR.

"From the paint schemes to the historic track and throwback tire design, few races capture NASCAR’s tradition like the Goodyear 400,” said Kerry Tharp, president of Darlington Raceway. “As NASCAR’s longest-running continuous partner, Goodyear is uniquely woven into the fabric of the sport and is an ideal partner for the Official Throwback Weekend of NASCAR at Darlington Raceway.”

To bring spectators closer to the action, Goodyear is introducing the “Bring Home the Win Sweepstakes,” giving one lucky fan the chance to win one of the throwback Goodyear Eagle race tires from the winning driver’s stock car. Now through May 9, fans who visit Goodyear400Sweepstakes.com and complete the online entry form will automatically be entered for a chance to win one of the limited-edition tires, used exclusively by the winner of the Goodyear 400*.

Tune in to watch the Goodyear 400 on Sunday, May 8 at 3:30 p.m. ET on FS1 and Motor Racing Network, where Goodyear will provide aerial coverage of the race.

*NO PURCHASE NECESSARY TO ENTER OR WIN

The Bring Home the Win Sweepstakes is open to U.S. citizens and U.S. resident aliens who are physically located in and legal residents of one of the 50 United States or the District of Columbia who are at least 18 years of age (19 in Alabama and Nebraska, 21 in Mississippi) at time of entry. Sweepstakes commences at 7:00 AM ET on April 11, 2022 and ends at 11:59 PM ET on May 9, 2022. Subject to Official Rules at www.goodyear400sweepstakes.com/. For method of entry and prize description see Official Rules.  Msg & Data rates may apply. Odds of winning depend on number of eligible entries received.  Total ARV of Prize is $501. Sponsor: The Goodyear Tire & Rubber Company, 200 Innovation Way, Akron, Ohio 44316. VOID OUTSIDE OF THE 50 UNITED STATES AND THE DISTRICT OF COLUMBIA AND WHERE PROHIBITED BY LAW

Darlington Raceway, nicknamed The Lady in Black and the track Too Tough To Tame, is home to the award-winning Official Throwback Weekend of NASCAR and annually hosts two NASCAR Cup Series race weekends, along with the NASCAR Xfinity Series and/or NASCAR Camping World Truck Series. Opening in 1950, Darlington Raceway is “A NASCAR Tradition” and NASCAR’s original superspeedway with its famed 1.366-mile egg-shaped oval, challenging the sports best in one of the most iconic NASCAR races, the Southern 500®. For more information about Darlington Raceway, visit darlingtonraceway.com.

Goodyear, the longest-running continuous partner in NASCAR history, returns as the entitlement sponsor of NASCAR’s Official Throwback Weekend Cup Series race for 2022. The Goodyear 400 will take place Sunday, May 8 at Darlington Raceway and extends Goodyear’s 68-year affiliation with NASCAR. 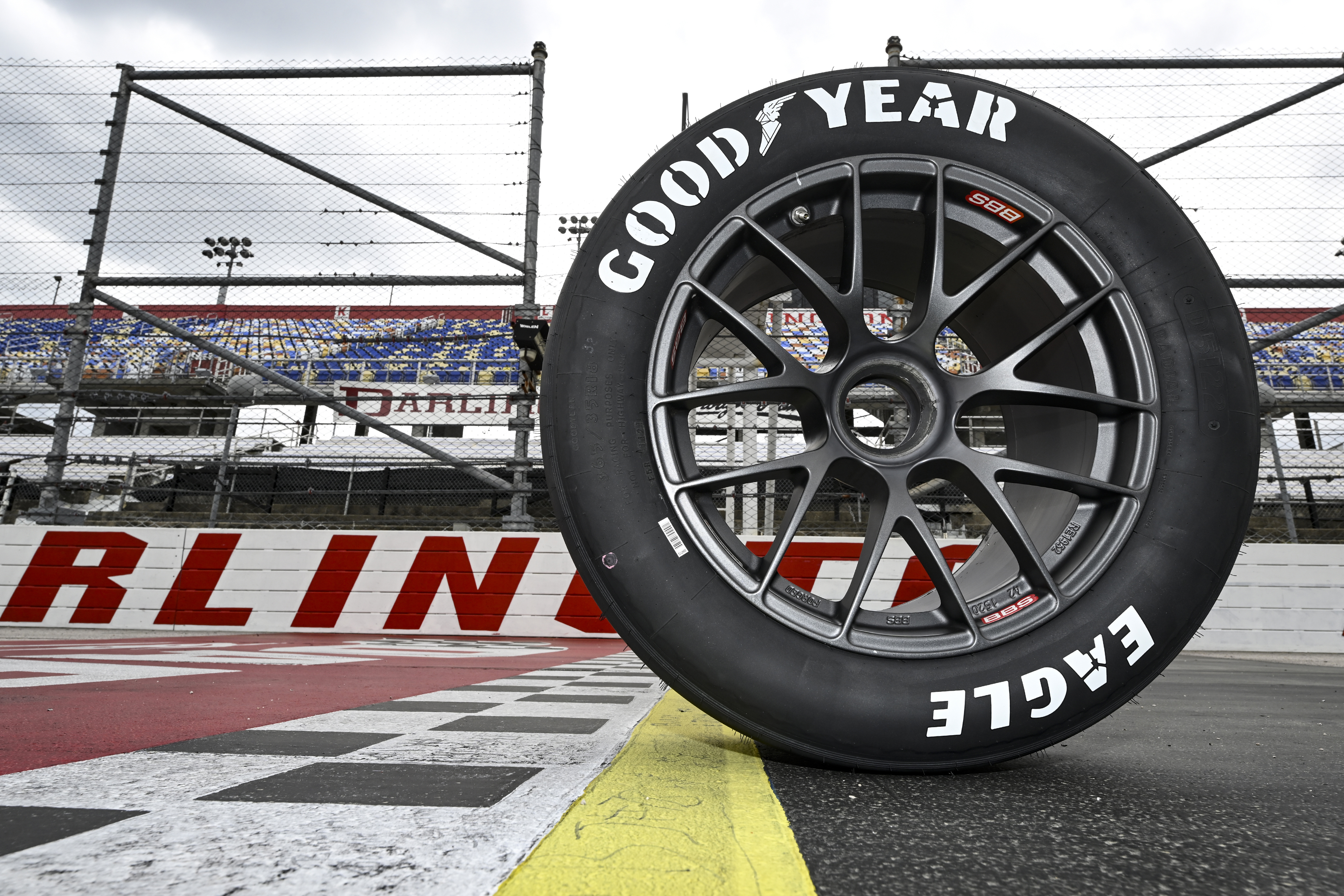 Goodyear will sport a vintage sidewall design on its Eagle race tires for all three national series races during NASCAR’s Official Throwback Weekend. The sidewall design was last used during the 1980-1992 Cup Series race seasons and pays tribute to the first time Goodyear featured “Eagle” on its race tires’ sidewalls in NASCAR. (NASCAR images for Goodyear) 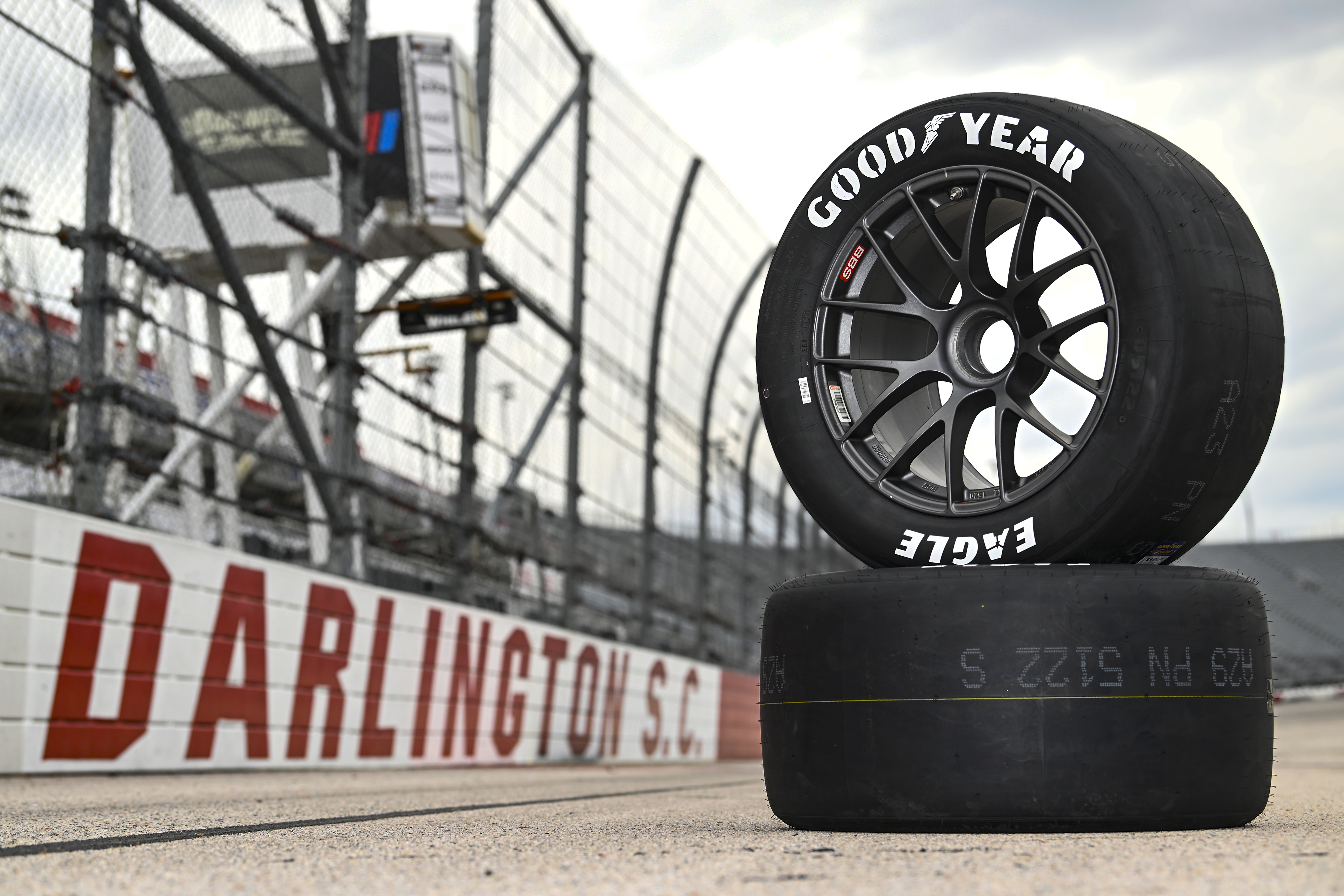 To bring spectators closer to the action, Goodyear is giving one lucky fan the chance to win a “throwback” design Eagle race tire from the winning driver of the Goodyear 400 through the “Bring Home the Win Sweepstakes.” Fans can enter now through May 9 on Goodyear400Sweepstakes.com. (NASCAR images for Goodyear)