Read about Goodyear’s namesake, Charles Goodyear, and the accidental discovery that lead to the vulcanization process.

In 1833, 33-year-old Charles Goodyear decided to find uses for rubber. Others had used it for rubber shoes and coats, but they melted during the heat of summer. Goodyear believed rubber could be "tanned" or "cured" like animal hides. Dropping all other interests, Goodyear tried adding various chemicals to change rubber's properties, commandeering his wife's kitchen in the process.

As the story goes, in 1838, he met Nathanael Hayward, who discovered that mixing sulphur with rubber and exposing it to sunlight reduced its stickiness. He cured the mixture in an acid bath, which stabilized the rubber. He went into business in Woburn, MA, producing rubber products such as life preservers and mailbags, but discovered that prolonged exposure to heat still melted the product.

By Goodyear's own recounting, in 1839, he accidentally dropped a piece of sulfur-coated rubber he was holding onto the surface of a hot stove, where it charred like leather. The high temperature and short exposure to the heat changed the properties of not just the surface of the treated rubber, but the entire sample. He called the heating process vulcanization after the Roman god of fire, Vulcan. At first the process was hit and miss,  but in 1841, Goodyear successfully applied the vulcanization process using heated cast iron. 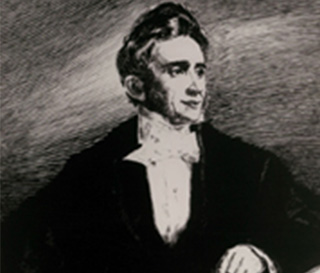 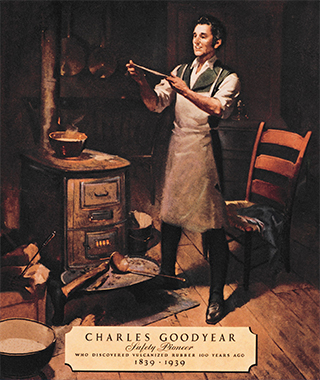