The story of how Goodyear pioneered the long-distance trucking industry.

One April morning in 1917, a group of Goodyear workers gathered in the chilly dawn at the company garage in Akron, Ohio. Before them stood an ungainly new truck, motor ticking quietly.

The truck was a five-ton Packard, but the 10-foot-high, specially built body had been designed by Goodyear.

The plan was to establish the first interstate trucking route by making regular nonstop runs from the Akron tire factory to the company’s tire fabric mill in Connecticut and return, a distance of 740 miles.

Across the width of the truck, behind the driver’s seat, was an enclosed sleeping compartment. Using a two-man crew, they would alternate driving chores while one rested in what was to become the first sleeper cab in the trucking industry.

Behind the novel traveling bunk, the cargo bed was loaded with a dozen spare tires, a compressor to inflate them, 500 feet of manila line, shovels, and a heavy block and tackle.

Handshakes done, two men stepped from the crowd and climbed into the enclosed cab. Drivers Harry Apple and Harry Smeltzer waved to their co-workers and started their trip into transportation history — an interstate truck run that pioneered long-haul trucking in the United States. What was most novel about Goodyear’s truck, named the Wingfoot Express, was the big pneumatic tires it rolled on. Hard, solid rubber tires were standard equipment for short hauls in those days.

But this trip was not to be a routine five- to 10-mile errand. Accompanied by a tire engineer, movie man, and a publicist in two support autos, this truck was to attempt a 1,540-mile round trip, an unheard-of feat in 1917.

The trucks of the day labored along at eight or 10 miles per hour, the solid rubber tires giving their drivers a bone-jarring ride. The cargoes most often were limited to less-than-fragile items like gravel, grain, coal, and lumber. Manufactured goods such as furniture, china, and pianos, as well as farmers produce and eggs, all suffered a high rate of damage and loss when carried by truck.

Paul Litchfield was plant manager of Goodyear in 1917 and the tire company was thriving. Litchfield was convinced that pneumatic tires would give the heavy trucks the necessary flotation traction and smooth ride to range as far as trains, carrying huge loads great distances.

Litchfield found his message falling on deaf ears. Both truck operators and manufacturers scoffed at the idea that air-filled tires could support five or 10 tons. “Show them” was Goodyear’s response. Only a successful, full-time trucking service, operating in fair weather and foul, would prove Litchfield’s theory.

The three-vehicle caravan that set out to do just that was barely to the Akron outskirts when it became mired in the mud. So began an agonizing odyssey of muddy ditches, broken bridges, blown-out tires, and engine failures.

It came as no surprise that a heavy truck would have much more difficulty on the poorly graded dirt roads than the farmer’s lightweight buggy. Bridges that safely carried farm wagons collapsed under the Packard truck. Twice the engine failed and had to be rebuilt.

The Goodyear crew doggedly pressed on. They added a winch to their equipment, more rope, and rapidly mastered the art of hauling themselves out of the mud. The support cars were worn out by the time the caravan reached Pittsburgh and were traded for new ones. Blowouts occurred about every 75 miles as the truck plodded ahead at 15 miles per hour.

As the Express traveled, Ferris Miller, the advance man and publicist, took pictures with his folding Kodak and wrote stories for local and national newspaper coverage.

“Every place we stopped we attracted a crowd,” Harry Smeltzer later recalled. “People would come around, kick the tires and want to know if they were solid or pumped up.”

The Goodyear team pushed on, across the Gettysburg battlefield and the farmlands of New Jersey, through historic Trenton to New York and along the roads that bordered Long Island Sound.

Finally, 21 days overdue, the bone-weary men in their mud-splattered truck entered the bucolic streets of Killingly, Conn. To their astonishment, they were greeted by a crowd of hundreds of Goodyear fabric mill girls and a rousing brass band.

As Smeltzer described the trip, “It took 28 days and 28 tires.” The trip back with fabric from the mill was less eventful and took just five days.

Walter Shively, the tire engineer, promptly applied the lessons learned in the grueling truck tire test and improved tires were almost immediately available. A stronger bead and heavier sidewalls produced a tire more resistant to blowout. The Goodyear cotton cord concept in tire construction already had proven itself in passenger car tires and was indispensable in building the sturdy tires that trucks required.

Future trips employed seven Wingfoot Express trucks, ranging from three- to five-ton models of White, Mack, and Packard. The 740-mile run one way was pared down to 80 hours running time within a year. They carried tires to Goodyear dealers in the Boston area, or shoe soles for New England footwear makers, bringing back tire fabrics from the Connecticut mill.

So reliable did the truck tires become, that in 1918 seven Express trucks carrying Boy Scouts completed a 3,000-mile excursion along the East Coast without a single blowout.

The immense pressure that World War I production was placing on the railroads in 1918 caused shipping delays across the country. Responding to an appeal from the American Red Cross, Litchfield sent his Wingfoot Express fleet to Chicago. They hauled a commercial load of tires to the Windy City, then reloaded immediately with 18 tons of Red Cross medical supplies destined for France.

Using the Lincoln Way east-west route from Chicago, the trucks delivered urgently needed supplies to transport ships at Baltimore’s harbor in just 100 hours. Average highway speed was 15 mph, considered remarkable at the time. A letter sent by Red Cross officials in Chicago to their office in Baltimore advising of the shipment arrived only two hours before the trucks.

The success of the Wingfoot Express was reflected by a spurt in highway construction, as state governments strived to improve roads within their jurisdiction.

The Lincoln Highway movement, conceived in 1913 to create a modern coast-to-coast highway, was strongly supported by Goodyear’s President Frank Seiberling.

In 1918, the same trucks that had conquered the ten-foot snow drifts of Pennsylvania’s worst winter in decades, left Boston for San Francisco. This time, the caravan faced a round trip of 7,763 miles, some of it across trackless desert.

In Wyoming alone, 36 of 56 wooden bridges gave way beneath the highway giants. This time the commercial cargo was aviation tires needed by the Army on the West Coast.

So began the long battle to unchain the truck from its parochial chores of shuttling cargo between the local railroad platform and nearby loading docks.

The Wingfoot Express had literally re-invented the truck, freeing it from its confinement to town or city streets.

Prophetically, a month after the start of the Express, Seiberling told the U.S. Chamber of Commerce that “the introduction of the motor truck into our commercial life sounds the death knell of the short line railroad.”

So, as the railroads had originally opened up the country and Ford’s Model ‘T’ put America on wheels, the Goodyear Wingfoot Express put business on wheels, creating a swift and reliable highway transportation industry that is still growing. 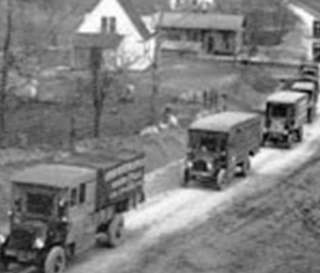 Led by Packards and Macks, seven Wingfoot Express trucks were making routine runs from Akron to Boston by the end of 1917. 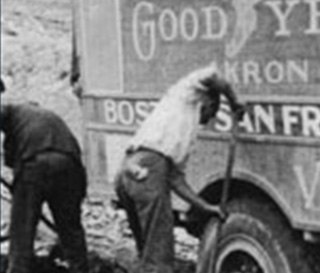 Drivers work to free the truck from the mud. 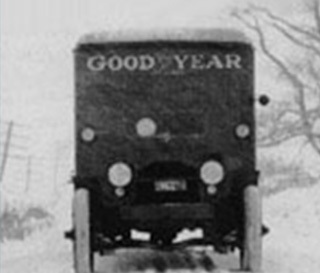 A Wingfoot Express Packard presses on to Boston through an Ohio snow squall in the winter of 1918. 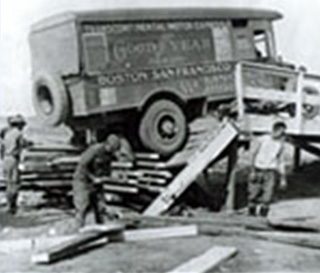 A broken bridge is repaired by drivers as they continue their maiden journey to Boston in 1917.