THE ORIGIN OF THE WINGFOOT

Learn how Goodyear’s iconic wingfoot symbol came to be.

The responsibility for the adoption of the Wingfoot symbol, known today in every country on earth, rests to a great extent with Frank Seiberling, the founder and for many years president of The Goodyear Tire & Rubber Company.

In the old Seiberling home in Akron, on a newel post of the stairway, there stood a statue of the famous god of mythology known to the ancient Romans as Mercury, and to the Greeks as Hermes.

Mr. Seiberling's attention was attracted to the statue, and he felt that the god it portrayed embodied many of the characteristics for which Goodyear products were known.

A meeting to discuss the idea of suitable trademark was held at the Seiberling home in August 1900. Something distinctively Goodyear was needed to distinguish it from other companies.

Among the sketches prepared for the meeting at Mr. Seiberling's suggestion was one using the winged foot of Mercury.

Everyone present agreed that this should be the symbol for the company, with the Wingfoot to be set in the middle of the word "Goodyear." The original Wingfoot, however, was much larger in relation to the word "Goodyear" than the one in use today.

Mercury in ancient times was the god of trade and commerce; but it was as a swift messenger for all the gods of mythology that he was best known, and as such he has continued to be known through the centuries.

The idea of speed had much to do with Goodyear’s selection of the symbol, for the wingfooted Mercury was regarded as a fleet herald of good news. But it is as a herald or carrier of good tidings to users of Goodyear products everywhere that the Wingfoot now stands in the minds of the people of the world. 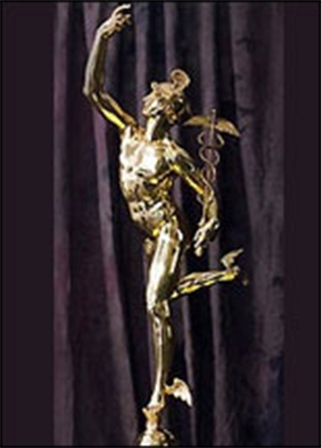 Mercury (or Hermes, in Greek), fleet herald of good news and god of trade and commerce, was the wingfooted inspiration for the Goodyear logo.