Laurette T. Koellner, retired president of Boeing International, was elected to the Board of Directors of The Goodyear Tire & Rubber Company on February 23, 2015 and currently serves as Lead Director.

Koellner most recently served as Executive Chairman of International Lease Finance Corporation, an aircraft leasing subsidiary of American International Group, Inc., from June 2012 until its sale in May 2014. From 1978 until 2007, she held positions of increasing responsibility at McDonnell Douglas Corporation and The Boeing Company, an aerospace company, including as President of Boeing International, where she oversaw Boeing’s international operations, and President of Connexion by Boeing, which provided satellite-based connectivity services to aircraft and maritime vessels. While at Boeing, Koellner also served as Vice President and General Auditor, Vice President and Corporate Controller, and Chief Human Resources Officer.

Koellner has served on several other corporate boards and is currently a director for Celestica Inc. (since 2009), Nucor Corporation (since 2015) and Papa John’s International, Inc. (since 2014). 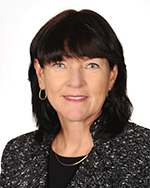