Thomas L. Williams, chairman of the board and chief executive officer of Parker-Hannifin Corporation, was elected to The Goodyear Tire & Rubber Company's Board of Directors on February 26, 2019.

Williams has served as CEO at Parker, a manufacturer of motion and control technologies and systems, since February 2015 and chairman of the board since January 2016.  From August 2008 to February 2015, he was executive vice president and operating officer of Parker.  Williams joined Parker in 2003 as Vice President Operations — Hydraulics Group, and became president — Instrumentation Group in 2005 and senior vice president — operating officer in 2006.  Prior to joining Parker, Williams was employed by General Electric Company for 22 years, where he held various executive operating positions for four different business groups:  GE Capital, Aviation, Lighting and Transportation. 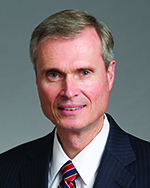